Would you drink a whiskey that was supposed to taste like deer? Later this month you’ll have the chance. 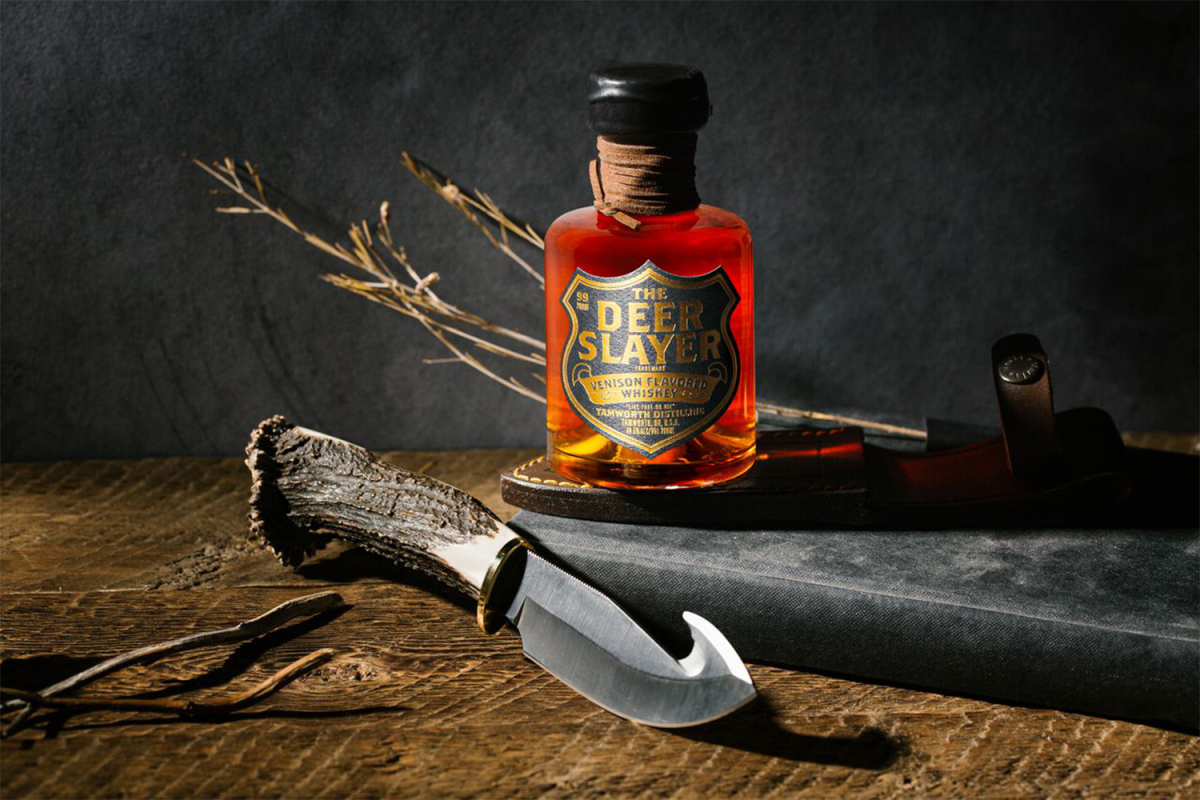 “No matter what the world thought 2020 would be like, it’s safe to say that everyone was wrong,” Steven Grasse said in a prepared statement. “I have been interested in the idea of using venison and durian fruit as flavoring agents for some time. The gaminess of the venison lends itself as a savory compliment to the sweetness of the wheat whiskey creating a truly creative carnivorous concoction, while the juxtaposition of death and decay to delicate and floral notes of the brandy, is purely divine.”

Yes, “death and decay” are flavor notes for that durian brandy. Prepare your palate.

The Deerslayer (99 Proof, $65) is a surprisingly delicate-bodied whiskey flavored with the flora and fauna of New Hampshire in autumn— specifically, venison. The Deerslayer is crafted with three-year-old white wheat whiskey that allows the venison flavor to truly shine and distilled with slow-smoked red deer venison and seasonal ingredients including porcini mushrooms, cranberries, juniper berries, and green peppercorns. Ideal for venison-lovers and non-vegans alike, the savory and smoky notes characterize this one-of-a-kind spirit, with subtle spice on the palate up front and a lingering, gamey finish.

Corpse Flower Brandy (86 Proof, $65), distilled with indole and the famously stinky durian fruit dubiously dubbed the “corpse flower”, is not for the faint of heart – But the rewards are plentiful. While the sweet and ethereal scents of most flowers are meant to attract bees and other pollinators, the grittier blooms use the scent of decay and death to attract all manner of insects. It’s this very tactic that is infamously employed by the Corpse Flower. Tamworth Distilling Corpse Flower Durian Brandy explores the relationship between funky and floral, decay and bouquet with its diabolical mix of the some of the most pleasingly unpleasant petals in the botanical world. This cryptic libation is meant to be sniffed before sipped: The initial whiff may bring shivers down imbibers’ spines, but with a simple 1:1 ratio of dilution or the addition of a melting ice cube, the pungent, sickly aroma will turn into a sweet, sophisticated sipper that is nothing short of alluring.

Eau De Musc ($65, 88 Proof) Available nationally through online retailer Warehouse Wines & Spirits for $65/bottle, Grasse’s singular Eau de Musc proudly features an old-world flavoring technique that uses the oil extract from the castor gland of the North American beaver, which exudes a leathery, raspberry taste, and acts to fortify the whiskey flavors. The full-bodied, two-year aged bourbon whiskey has a bolstered mouthfeel with a vanillin nose and notes of spice. The addition of birch oil, raspberry and Canadian snakeroot, a woody spice akin to ginger, comingle with the natural fruitiness of the castoreum, making the finish warm, crisp, and incredibly palatable.