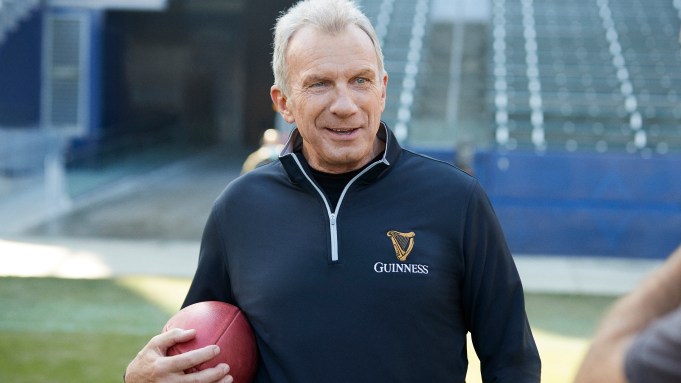 Fans who tune in to the Super Bowl this Sunday are already expecting to see two all-star quarterbacks. Some of them will glimpse three.

Patrick Mahomes and Tom Brady will command this Sunday’s broadcast, leading on-field strategy when the Kansas City Chiefs and the Tampa Bay Buccaneers clash during CBS’ broadcast of Super Bowl LV. In three parts of the country, however, during a commercial break, viewers will see another veteran of the gridiron classic: Joe Montana.

The former San Francisco 49er will hold forth for Diageo PLC’s famous Guinness beer in a 60-second ad, telling a small section of the game’s overall viewers that being great “is about how you come back — from a bad play, or the hardest year ever.” It’s the sort of inspiring concept that seems perfect for a national Super Bowl ad, except for the fact that Diageo’s rival, Anheuser-Busch InBev, has long had a lock on national ad inventory in the game, in a long-running deal that has since 1975 made it the event’s exclusive beer sponsor.

“We have to fight through this, no matter what,” Montana says of the national mood in an interview. “It will come to fruition, if you’ll just be patient.”

Yet Montana will also be leading a battle of another sort: Several the industry’s biggest brewers are lining up on the edges of the game in a bid to unseat their rival. Diageo, Boston Beer and MolsonCoors have all prepared marketing salvos tied to the Super Bowl that their executives believe can get broad exposure — even without an ad in CBS’ national broadcast. And they are opening the bar, so to speak, in a year when Anheuser-Busch InBev has decided to focus on brands other than Budweiser, its flagship, which will not have an ad in the Super Bowl for the first time in 37 years.

“We are on TV in some strategic local markets — Chicago, Orlando, San Francisco — and we have a big digital buy that will set us up nationally,” says Jay Sethi, chief marketing officer of Diageo Beer, in an interview. “What we are really hoping is that people like the message enough that they will share it.”

Boston Beer plans to air ads during the CBS broadcast in local inventory in Boston and New York, using horses made to look like Budweiser’s famous Clydesdales. Meanwhile, MolsonCoors has launched a digital promotion for its Coors Light and Coors Light Seltzer that asks users to watch a short film the company says will stimulate pleasant dreams (and offers a way to sample the seltzer).

Relying on local media and digital and social outreach is significantly cheaper than buying a traditional Super Bowl commercial. CBS has been seeking around $5.5 million for a 30-second spot in the game, and the cost of producing glitzy ads, replete with special effects, celebrity endorsements and popular musical selections, can easily get into the hundreds of thousands and even millions.

The strategy of working outside the borders of the Super Bowl is so appealing that even Anheuser-Busch is using it.

The giant brewer is running ads for its Stella Artois and Cutwater Spirits during local ad inventory in the Super Bowl broadcast. Stella Artois has struck up a partnership with Lenny Kravitz, and will run ads in New York, Chicago, Philadelphia, Miami and Los Angeles, says Lara Krug, vice president of marketing for the brand. Digital outreach and public relations, she says, can help get the message out to consumers across the nation.

This won’t be the first Super Bowl in which a rival beer has tried to muscle on to Anheuser’s turf. Will Ferrell did an ad for Pabst Brewing Co.’s Old Milwaukee in 2012 that aired only in North Platte, Nebraska. But the comedian’s social-media antics were enough to draw national attention to the spot. Heineken in 2005 ran a 60-second ad featuring actor Brad Pitt across a range of local stations during Super Bowl XXXIX. And Miller Brewing in 2009 ran a series of one-second spots on local stations showing the pigskin extravaganza.

What’s changed in the intervening years is consumers’ ability to get news and information quickly via outlets other than broadcast or cable networks. Some viewers will never see the ads from rival brewers on TV. But they may see something about them via a text from a friend or a social media post from an acquaintance. Anheuser’s national blockade still holds. But it’s never been easier to circumvent.

“It is the world that we are living in now,” says Krug, the Stella Artois executive. “Brands know that to be relevant to the consumer, you need to show up in a way and in a channel where someone will actually engage with you.”

As Super Bowl prices continue to soar, advertisers seem content to park themselves in less expensive parts of the game and use other techniques to make sure viewers see their efforts. PepsiCo’s Rockstar Energy Drink will run an ad just before kickoff, says Fabiola Torres, PepsiCo Chief Marketing Officer and senior vice president of its energy category, in an interview. “We know the audience is picking up at that time. Everyone is getting ready,” says Torres. “We are going to get enough eyeballs at that time.” Coca-Cola in 2019 opted to put its entire ad effort behind Super Bowl LII into a single pre-game spot.

Brewers are also eager to push their products to audiences who are likely not going to bars and pubs — a key source of sales. Guinness has seen so-called “off-premise” sales rise 12% in recent months, says Sethi, and executives believe the ad with Montana will inspire consumers to ask for a Guinness instead of someone else’s product. “If there was ever a time to ask, this was the time to ask,” the executive says.