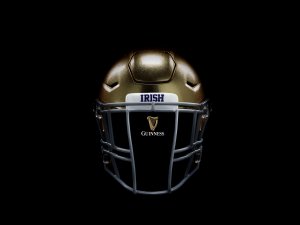 Last week, Diageo brand Guinness announced that it had reached a seven-year agreement to become the official beer of Notre Dame Fighting Irish Alumni and Fans. In conjunction with the announcement, Guinness announced that fans in select markets, including New York, Boston, Chicago and Indiana, would be able to buy special edition Notre Dame 8-packs of Guinness Draught cans. In addition, famed alumnu Joe Montana was named as the National Ambassador for the partnership.

The timing of the launch of this partnership may seem odd given uncertainty surrounding the 2020 football season, given that the Big 10 and Pacific 10 have announced the cancellations of their seasons, moves that has generated great controversy. As of this writing, Notre Dame, a longstanding independent in football, has announced that it will play an Atlantic Coast Conference schedule for 2020 year only. However, given the suspension of on campus classes in South Bend for 2 weeks due to a COVID-19 outbreak among students, the situation seems tenuous.

Con: Criticism of the University of Notre Dame for an Alcoholic Beverage Sponsorship

Because underage drinking, binge drinking, and alcoholism and a myriad of associated problems are undoubtedly a major issue on U.S. college campuses, Notre Dame, as an elite academic institution, will undoubtedly receive criticism for taking on a beer sponsor. The depth of the problem of alcohol on campuses should not be underestimated, as evidenced by the number of reported deaths, assaults and rapes that are alcohol related. As a result, it will be important that the campaign associated with this partnership emphasize responsible drinking. The press release announcing the partnership does note that it will emphasize safety and responsible drinking, suggesting that this aspect will be emphasized in the campaign in spots featuring Joe Montana — and both Notre Dame and Guinness should insist on this being a major part of the campaign.

To the degree that Guinness can get across a responsible drinking message effectively, the campaign is likely to be succeed, as from a branding standpoint there really is no other con of the partnership and, as will be seen below, there are multiple good reasons for it.

Diageo’s press release refers to the partnership as being “nearly two centuries in the making,” indicative of the Irish heritage of both Guinness and Notre Dame. Most literature on brand partnerships is suggestive of the need for a “fit” between the partners in order to affect affect transfer, in this case reinforcement of the Irish and/or Irish-American heritage of both brands. With Guinness having been established in 1759 in Dublin when Arthur Guinness signed a 9000 year lease on the St. James Gate Brewery, and Notre Dame being founded in 1842 and having a great football tradition, the fit here is very clear. The River Liffey and Touchdown Jesus conjure up positive images among many. 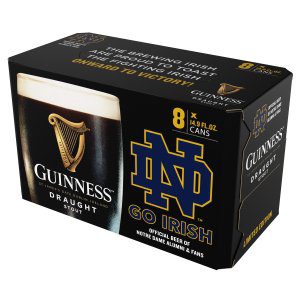 While a partnership between a single University and a beer brand may seem limited in scope on first blush, Notre Dame’s alumni and loyal football fan base is estimated to be at least 40 million consumers. Moreover, it is well documented that Notre Dame’s fan based is national, and perhaps even international in scope. Nikhil Shah, brand director at Guiness notes, “…the network of Fighting Irish supporters extends well beyond South Bend — from New York to Chicago to Baltimore to Dublin and around the world — this year and beyond.” This is a large group of engaged, core consumers for whom the “Irish” link matters, even among those who are not actually of Irish heritage. In a crowded and saturated market for beer, this type of association has the potential to move the needle.

Pro: Joe Montana Can Be Trusted to Score A Touchdown

As observed by Stephen Wang and Angeline Close Scheinbaum in the Journal of Advertising Research, expertise, trustworthiness, and attractiveness have been found to be factors closely associated with effective celebrity endorsements, with trustworthiness of the endorser is particularly important. It is difficult to imagine a better spokesperson for Guinness and Notre Dame than Joe Montana, who surely is thought of as high in expertise and attractiveness by Notre Dame football fans and likely has trustworthiness ratings that are off the charts among this groups. 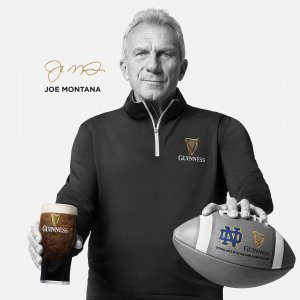 Montana, who has won championships both in college and and the pros, will be featured in TV ads, social media ads, and in other promotional activities that will include a focus on responsible drinking. In commenting on the partnership, Montana states, “I … love that Guinness and Notre Dame have shared values — a respect for tradition, but also a relentless desire to win and a commitment to building an even better future.”

All in all, the partnership makes a great deal of sense provided that responsible drinking is emphasized.