New York-based Hudson Whiskey has launched a Scotch barrel-finished rye expression as its first line extension in seven years and revamped its portfolio with new recipes. 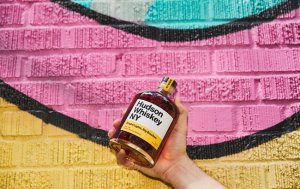 Made from a mashbill containing 95% rye and 5% malted barley, Back Room Deal has been finished in American oak barrels that were used to mature peated Scotch whisky. The additional ageing gives the rye expression aromas of smoke, vanilla, apricot and brown sugar. On the palette it is ‘bright and fruity with black pepper and mint, rye spice mingling perfectly with smoky peat notes’.

Alongside the release of the new whiskey, Hudson has updated the recipes for the other whiskeys in its portfolio to include liquid “just under one year to somewhere in between three to four years” older, the brand said.

As well as an updated recipe, each whiskey has been renamed. Hudson has relaunched its flagship Baby Bourbon as Bright Lights, Big Bourbon, the updated recipe is distilled from New York corn and aged in new charred American oak barrels, giving the whiskey notes of ‘rich vanilla and lightly salted caramel’.

Manhattan Rye has been renamed Do The Rye Thing and has been distilled from a mash comprising 95% rye, 5% malted barley. The whiskey has aromas of honey, straw and apricot, and flavours of black pepper and a slight fruitiness.

“Hudson shook things up when it started a movement here and now, once again, we will set the tone for what New York whiskey can be.

“That means liquid that has evolved with age, a fresh look to reflect our bold character, and reimagined names that evoke classic New York moments and that unmistakable New York spirit.”